Palladium Book’s Rifts RPG is a huge game! With a massive collection of World, Dimension, Conversion, and Core Books or otherwise, that’s a lot for a DM to remember, much less sift through to find each and every thing you need for the perfect encounter when your players inevitably destroy the campaign you had planned!

To make it easier on us poor, unappreciated, table riding DMs, Palladium had released a “Rifts Game Master’s Kit” (which they also offer for their Palladium Fantasy RPG) as a digital supplement available for purchase through Drivethru RPG at a very reasonable $5.00. This packet is also obtained for free for all “Megaversal Ambassadors” who apply for this title directly through Palladium Books.

So what’s included? In 50 pages, the crew over at Palladium tried to include the most helpful lists, charts, tables, and indexs they could put together. Here’s the breakdown:

The GM Reference Sheet is perhaps one of my favorite pages, with clean tables and boxes for saving throw target numbers, magic casting times, missile volley info, the complete attribute bonus section, page number references and more, it proves to have a great variety of commonly referenced information available in just a glance.

The Combat Matrix offers a neat little explanation on the use of its tables, and is a very easy to use page for keeping track of not only initiative, but any combat bonuses or detriments for PCs, NPCs and creatures all in one place, with plenty of tables for keeping on top of combat and damage as well. 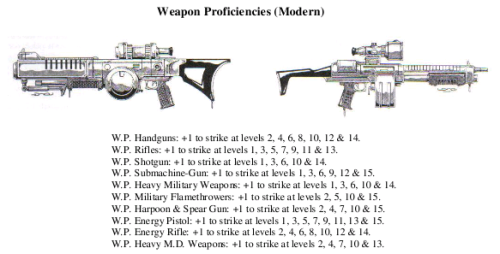 This Skill List is more complete than the average listing in the Rifts Ultimate Edition, as it includes any bonuses to attributes and S.D.C. listed next to the appropriate skills (such as the physical and military skills.) Also included are the bonuses awarded per such-and-such level of the weapons proficienies, which I know my players hate looking up and jotting down as much as I do. The only thing that could make this list more thorough is if any bonuses or requirements for skills were also listed, but that can be remedied with some highlighters and notation on your own part! This really streamlined my character creation process, as I had less flipping through to do with the book to find each individual description, especially for attribute bonuses.

Alphabetical Spell List…We’ve all had that player, right? The one who has a hundred spells or psionics or special abilities but doesn’t write them down? “Just let me look through the book to see what the range is…” No more! So long as they know the name you can save time by flipping right to it instead of pouring over the indexes and spell level section (or give them the page number and make them read it off.)

Writing up a ‘Borg can be a real pain, especially when it comes to keeping track of what conversions you have, where they are, and how many more you can stuff in! With a couple different pages to choose from, you never have to lose track of them or try to find space on your character sheets for writing it down again. It even has neat little boxes for your robot attributes and armour type.

While a fun addition, the Mini-Posters are not completely necessary unless you are actively seeking a playing group or to expand your current group. There are a number of different designs, some specifically aimed at promoting Palladium Books and their products as opposed to getting a group together, with interesting art and catchy taglines like, “This is not your typical adventure group.” However, I did once put up a homemade sign that basically detailed how you could be anything you wanted (even a dinosaur) in Rifts to get players interested, so whatever works or helps you get the word out on my favourite game is fine by me!

I’m sure you’ve all seen the most widely used Character Sheets (and its Mutant Animal counterpart,) but it’s nice to have it in a convenient .pdf that you don’t have to track down on your hardrive, and since you’re already printing off the GM Reference Sheets, may as well have some more Character Sheets ready in case of a sudden PC death!

These GM Logs are particularly useful, as well. With specific pages dedicated to experience logs, mercenary companies, and traveling shows, it is easy to find, all in one place, and very convenient for any campaign.

Lastly, we have 20 complete Sample Characters. Not everyone enjoys writing up characters like I do, and sometimes it’s hard to get a new player interested if they have to sit through the process (and holding up a game just to write up a toon for the new guy is typically out of the question!) These are super convenient for NPC and player use, and even moreso if you are putting together a campaign which you need a set group of PCs for! They will require some slight research to be played long term, but only because their spells and skills are simply listed with no description or level up bonuses; which still takes a lot less time than writing up a whole character.

Altogether, I’d call it money well spent! Even though I do plan on becoming a Megaversal Ambassador one day soon, it’s nice to have these cheap cheat sheets to make my life as a perpetual DM easier right now.

Any image or information provided pertaining to the Rifts RPG is the sole property of Palladium Books and any artists therein. I claim no ownership of content.