After the past three months, we’ve finally settled into some semblance of a routine with our children – that is to say, I’ve been getting more sleep at least. So I’ve pieced this together in what little spare time I have before allowing myself to pass out at an hour that a younger (childless) me would scoff at.

I was inspired to write up another Dog-Boy by Brian Fields, AZ_Rune on Twitter, who hit 200 followers and randomly selected two of their followers for a free art piece to celebrate. I was one of those lucky winners, and I decided to go back to where it all began; my first ever RPG experience with a Freeborn (Malamute) Dog-Boy in Rifts. She was called Cinder, and that campaign and character are still spoken of around the table by my groups. Featured below is the phenomenal piece Brian worked up for me, and you can find more of his artwork on his deviantArt. Check out that badass “head count” on her shoulder and the Triax wrench! Please note that this character post is not the character in the artwork, merely inspired by it. 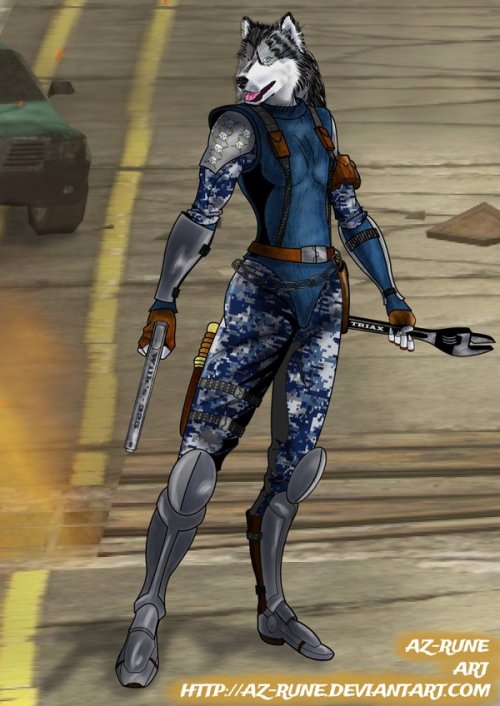 This particular character also has a disability: Deafness. As a result, her language skills have been altered to suit, with spoken language taking a -20% penalty, and Sign Language “replacing” the skill percentage of their native language. I’ve also raised base skill percentages regarding her other senses, like smell (+30%) and psychic tracking (+10%), to allow for their increased usage/proficiencies. I’ve also deigned to lower Prowl by -10%, as she can’t as easily judge how noisy she is, and a -3 to Perception Rolls (but +3 regarding smell.)

'Well, bears have a very distinct smell. Even if they didn't, I know what signs to watch for, should we approach their territory. Besides, it's not the bears you should worry about in these parts.' - Redcloak