I really adore how much I can play around with the cultures and planets of Wayfarer and its listed races. This was an exercise in exploring such unknown, vaguely described territory. While the Scilinoids are described as fairly primitive, I feel the language barrier has a lot to do with this as a preconceived notion. They have their own underground cities and representatives, and I think, much like humans, different “skin” colors and ethnically diverse cultures. I also like to believe that Scilinoids physically grow their children like seeds, first in the ground, and then after they get their protective layers, above ground (they are described as rock like in appearance but plant like in nature.)

Once again, this character is created based on Wayfarer: Things Beyond Wonder, which I reviewed previously.

Game: Wayfarer by Ill Gotten Games.
Books Needed: Wayfarer: Things Beyond Wonder.
Recommended Setting: Any starting adventuring group. Perhaps this character ended up getting lost or accidentally left behind during an attack on those they were guarding and met up with the party. 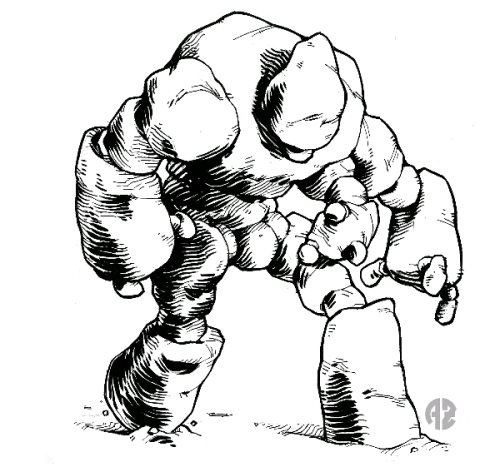 Dense (2) For each rank in this trait, increase your MAS and FOR by one, reduce your SPD by one, and receive a -1 penalty to Swim tests. (Already applied.)

Extra Limbs (2) When multi-striking or performing similar DEX, CRD, or AGI based tasks, you may make an additional attack or similar action per rank in this trait. In addition, this trait gives you a bonus equal to its value when performing actions where multiple hands (or similar appendages) would be helpful (climbing, grappling, et cetera).

Natural Weapon: Crystal Spurs (3 – Piercing) You have a natural weapon (fangs, claws, horns, et cetera) that inflicts extra damage equal to the value of this trait when making unarmed attacks. You should specify which type of damage (cutting, piercing, et cetera) the weapon deals when this trait is chosen.

Tricks
Close Assault You are not required to pass grapple tests to make attacks with weapons with a Heft value lower than your STR while in a contested grapple.

Driving Strike You increase the Penetrating feature of melee weapons you wield by 1.

Negotiator When attempting to change attitude favorably during a conflict, you may reduce the random DV by one die.

Reflexive Disarm Whenever you successfully parry an opponent’s melee attack with a differential greater than 5, you may make a free disarm attempt.

Gear (Quantity):
Backpack TL: 1. A useful accessory common to most travelers. Makes carrying things on one’s person a heck of a lot easier.

Rope: Nylon (2) TL: 1. Whether made from hemp or nylon, rope can be an essential item in any adventurer’s inventory. Each purchase of rope is for 10 increments worth.

Med Kit (2) TL: 6. A staple found in any civilized world. When making an Emergency Medicine test, use of a med kit grants a +4 bonus.

Personal
True Name: Gul’shoomok
Homeworld: Quadra 7 (in the Free Territories)
Languages: Grevhyz (due to constraints of their physiology, Scilinoids may comprehend other languages, but may only speak their own), Dominion Standard
Gender: Non-Binary
Age: 210
Height: 9′ 3″
Weight: 972 lbs.
Diet: Photosynthetic
Description: They resemble a bunch of various sized, Red
Stone (both a descriptor and an ethnicity in Quadra 7) boulders stuck together and covered in patches of foot long crystals (also red), they have four arms total (of equal size, two on “shoulders”, two mid-torso) but no visible eyes. While they stick out on other worlds, on their homeworld and in their home city, their appearance is rather ordinary. A bit of a loner, they are quite intimidating in their pieced together armour with a giant maul across their back.

Backstory Like many Scilinoids, “Sherman” (a nickname given to them by Dominion Standard speakers) was large and intimidating, but they had a gentle soul and incredibly protective nature. They could have easily become a Warrior, like many of their family, but became a Soldier to see more of their world (and potentially others.) Sherman worked hard to learn to understand and write in Dominion Standard, in the hopes that they would one day see the Multiverse and encounter strange alien races to write about; their poetry was a result of this drive to learn and their yearning for more, and they became quite the skilled writer. Their efforts were rewarded with a promotion and assignment to the “Peaceful Forces”, the guard of ambassadors for their race and planet who went off world to see to trade and politics. They are very proud of their job.
Family Tree: Grown of Fildaak’noor (a Red Stone Warrior) and Rithnoark (a Grey Brick Trader), they do not sustain much contact with their Planters (parents) – due primarily to a lack of technology comprehension (in fact, they find most technology to be tasteless and disturbing.) One Seedmate (sibling), Goshhlunk, still very young, who will stay with their Planters until they come of age and seek their own life and learnings.

Any image or information provided pertaining to Wayfarer is the sole property of Arian “Dutchmogul” Croft, Ill Gotten Games, and any authors or artists therein. I claim no ownership of content and am using any images or referenced texts with written permissions.