Since I recently posted a review for Wayfarer: Things Beyond Wonder, and because I needed a break from my string of Rifts characters, I figured I should test out the character creation process! What better excuse than Toon Tuesday?

I found the process itself to be pretty streamlined; it took me 40 minutes (not counting breaks between my toddler’s naps) and everything was fairly easy to find in the book – though I had read the text beforehand. I did not use completely random generation (as is an optional feature during creation), since I started with a vague idea that just took on a life of its own as I continued. The Tricks (kind of like Feats) are an especially interesting part of this character, as his size factored heavily into my selections. This was very entertaining and easy to write up, I’ll have to start my own campaign for it soon to test the game play.

I had to take some artistic liberties in back story, family trees, and other personal areas, because while the book gives an idea about the Fairy Courts and its people, it is a vague one (specifically designed to be open to interpretation, I’m sure.)

Game: Wayfarer by Ill Gotten Games.
Books Needed: Wayfarer: Things Beyond Wonder.
Recommended Setting: Recommended to any average adventuring group who needs a brawler/melee combat specialist. Though he would be better suited to a fantasy campaign or a Tech Level of 5 or less, he could still function in a higher level/sci-fi environment, he’d just be a bit out of his depth. He would be unsuited allied with evil-doers. 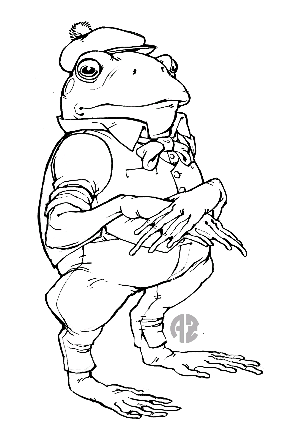 'Take it from me, it's the small ones you need ta watch out fer! 'Ve taken down great bullies bigger 'n you before!' - Rodo the Small

Acute Sense: Scent (4) You gain a bonus equal to the value of this trait when making PER-based skill tests that utilize the chosen sense.

Adaptive (3) For each rank in this trait, you gain an additional skill roll with a +15% bonus during character creation.

Dull Sense: Hearing (3) You receive a penalty equal to the value of this trait when making PER-based skill tests that utilize the chosen sense (sight, hearing, scent, et cetera).

Magical Being You were created by magic and, as such, have a natural Magic Point (MP) pool equal to your WIL score x5.

Skill Adept: Courage (2) Whenever you would test a chosen, open branch skill (Courage, Swim, Alertness, et cetera) you gain a bonus equal to the value of this trait.

Tolerant (5) You gain a bonus to Control tests made to reduce the penalties inflicted by injury or fatigue equal to the value of this trait.

Tricks
Arcing Strike You may simultaneously attack two or more adjacent opponents with a single melee attack roll, taking a -1 penalty to your attack roll for each opponent added this way.

Balanced Defense When parrying with a weapon with the Balanced feature, you may roll an extra die and choose the highest result.

Chain Strike After making a melee attack against a single opponent with a weapon for which you possess the Weapon Focus trick, each following attack within the same round made against that opponent confers a cumulative -1 penalty to defense tests.

Giant Killer You gain a +2 bonus to attack rolls against targets whose BUL exceeds your own by at least 5.

On Guard While defending, you may roll an additional die per defend action and gain a bonus to your next defense test equal to the BUL differential between you and your attacker (provided you are smaller).

Resilient When testing FOR to resist physical damage you may roll an extra die and choose the highest result.

Weapon Focus: Glaive Choose a single variety of weapon (short sword, energy pistol, assault rifle, et cetera) covered under a weapon skill for which you possess at least three ranks (swords, pistols, rifles, et cetera). When making tests to wield that weapon, you may roll an extra die and choose the highest result.

Clothing/Armour:
Traveler’s Clothing PROT: 1. Thermal Adaptation (both heat and cold) trait of 5 when worn. +2 bonus to Diplomacy and Barter tests with other versers who recognize your impeccable tastes.

Gear (Quantity):
Backpack TL: 1. A useful accessory common to most travelers. Makes carrying things on one’s person a heck of a lot easier.

Rope: Nylon (1) TL: 1. Whether made from hemp or nylon, rope can be an essential item in any adventurer’s inventory. Each purchase of rope is for 10 increments worth.

Utility Belt TL: 5. A useful accessory common to most travelers. Makes carrying things on one’s person a heck of a lot easier.

Personal
True Name: Rodolphonus Burrowdash
Homeworld: The Fairy Courts (Seelie)
Languages: Dominion Standard, Fairyspeak
Gender: Male
Age: 27
Height: 4′
Weight: 95 lbs.
Diet: Omnivorous, though he prefers fruits to meats and vegetables – nothing beats a good cheese omelet in the morning, though.
Description: Short and very stout, his fur is black and grey with broad white stripes down his forehead and over his eyes, he also has light brown eyes – like most badgers. Wearing his armour frequently (unless sleeping), he keeps the heavy chainmail well polished and maintained. Though he has a pack, he doesn’t carry much, partly due to his size, but mostly because he has little need for most technological or luxurious materials.

Backstory Born of mustelid Pookahs in the Gnotwood, Rodolphonus was always the runt of the family, despite being the oldest of his siblings. Teased and taken advantage of from a young age (which only increased as his hearing worsened, an unfortunate inheritance from his Mother), he got plenty of practice fighting, and took to his role as the eldest sibling with a fierce protectiveness. At first, “Rodo the Small” was a vicious taunt, but after he proved his skills bringing down much larger opponents, it became a badge of honor. He adapted well to protecting the forests and plains of Gnotwood from its Unseelie adversaries, and became somewhat revered for his skill at “giant slaying” (especially with a glaive, which gave him some extra reach to work with.) It was proud work, but he felt empty; there was much to see in the Multiverses, varying tech levels and legends to seek out, his own sense of worth yearning to grow and improve against greater challenges – leave his own mark on other worlds, prove that size is not an indicator of strength (a bit of a sore spot for him). Is he compensating for something? Well, probably – but not like you think.
Family Tree: Oldest child of Fera Burrowdash (Badger, Mother and head of the family, Trader) and Oaklund Rivertrack (Otter, Father, Soldier). He has three younger siblings (from next oldest to youngest); Reedis (Otter, Sister, Mage), Gordonally (Otter, Brother, Trader), and Tylillah (Badger, Sister, Engineer).

Any image or information provided pertaining to Wayfarer is the sole property of Arian “Dutchmogul” Croft, Ill Gotten Games, and any authors or artists therein. I claim no ownership of content and am using any images or referenced texts with written permissions.

One response to “Toon Tuesday: Rodo the Small, a Badger-Pookah Warrior (Wayfarer: TBW)”