Hey! It’s been a couple years, huh? So much has happened since the last time I posted, lots of big life changes (2 kids now, getting divorced, moving state soon…gonna be busy) I probably won’t be posting on a schedule, but I still adore writing up characters. And, hey, I’ve got a new domain name for the blog! Time to print up some business cards, heh.

Though, this isn’t technically a character I wrote… but I did help! My new partner (who usually plays the grim and gritty World of Darkness and is probably going to introduce me to it soon) has never played Rifts before, and so when I went to visit him, I brought the books with me and showed him the ropes! I think he was trying to write a “boring” character, but he had a lot of fun and we laughed quite a bit. It’s amazing what you can learn about someone when you write up a character together!

Game: Palladium Books’ Rifts RPG
Books Needed: Rifts Ultimate Edition
Recommended Setting: Any starting level, low powered campaign – this character is a skill character NOT a kill character. The running joke with Chester here is that he only has one business card left and was just on his way to Kinko’s to get more when he was sucked into some conflict or another, and then forcibly conscripted into a band of mercenaries because, hey, they needed a doctor. 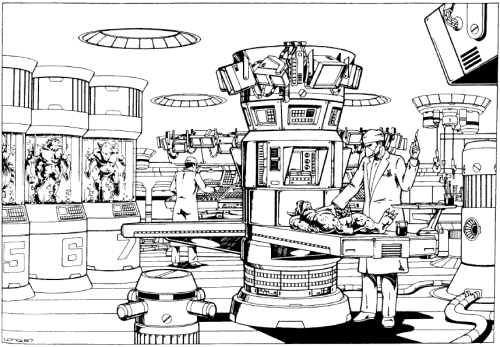 A human Body Fixer stands among a host of test tube bound mutant humanoids in a laboratory, preparing for surgery…or dissection.