I was inspired by the fantastic work below, which is done by the professional, French artist Aube (also known as Dawn) and is used with full permissions. You can check out their works through Facebook, Tumblr, DeviantArt, or their main page on Blogspot (you may have to translate the pages from François.)

The layout is based on the race templates used in Rifts World Book 30: D-Bees of North America, so it should be easy to use, and is complete in that you could use this information to create your own Bear-Centaur player and nonplayer characters. This is a variation of the official Centaur R.C.C., though I’ve made great efforts to differentiate between the two. I tried to keep things balanced; Beartaurs are stronger but not as fast or enduring as Centaurs, and though they are magical, they cannot be psionics and do not interact with technology as often as Centaurs do (according to the text).

If you do decide to create a character using this template, please let me know! It’s what it was made for, and I’d love to hear about it!

Game: Palladium Books’ Rifts RPG
Books Needed: Rifts Ultimate Edition, Rifts: Book of Magic, and Rifts World Book 30: D-Bees of North America for reference.
Recommended Setting: They are generally well suited to outdoorsy, traveling campaigns; not suited for tropical or otherwise hot climates due to their thick fur, but that fur helps them traverse many of the harshest cold climates. 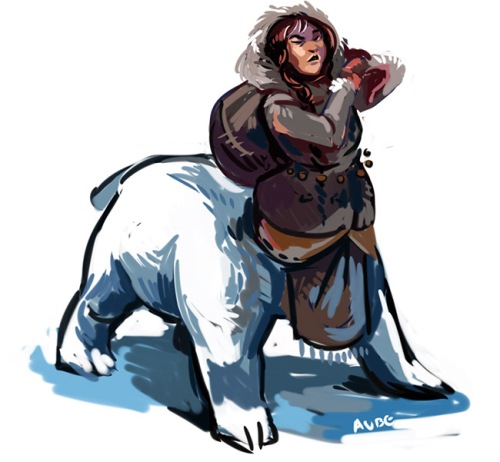 An arctic 'Bear Taur', half humanoid and half polar bear, stands proudly on the ice, likely watching over their Inuit friends. (Art by Aube.)

The elderly woman smiled at me as she handed over a smooth carving made out of some kind of tusk, perhaps walrus. She spoke lowly in her native Inuit dialect, describing the odd composition of the sculpture, “Like the arctic bear, white as snow and as large as a snow drift; almost as tall as a fully grown man before reaching their human waist. At first, we were all frightened, for they are big and frightening, but they are not so different and scary as we found out. They dress like we do in parkas and furs and blankets, trade with us, too – their magic impressed our Shaman and their goods impressed the rest of us. Their faces are different, hairy and with a nose like a bear, but not like their legs are. They travel, a whole tribe, and trade with other Inuit peoples, bringing goods we need for the harsh winter and using magic to help protect our people. We call them ‘Bear Friends’.”

Even as she related how peaceful the Bear-Centaurs supposedly are, I cut my mitten on the sharpened spear of the carving, which was held by strong human arms and almost as imposing as the reared up figure’s powerful ursine legs. The sculpted face was mostly featureless, but I had a hard time imagining anything but a snarl or an open mouthed roar upon it. If these creatures are so strong physically as well as magically, I am sure I would not want to come across one on the tundra – much less an entire pack. Regardless of the account of this tribe, and as uncivilized as they are, we seem to still have every right to fear these beings. – an excerpt from the personal journal of Robert Cote, Canadian cartographer and scholar.

Sharing the homeworld of Centaurs, Bear-Centaurs are just one of the subtypes of the race (the Equine family are most commonly recognized, but Ursine, Feline, and Canine types are also inhabitants). Where Centaurs are regularly regarded as creatures of myth, having visited Earth in its long past and since been written in to its legends, Bear-Centaurs have very rarely visited the planet until after the Cataclysmic Event; when they had, they’d either remained undiscovered, were seen as monstrous beasts, or thought to be hallucinations.

Since the coming of the Rifts, however, a number of them chose to emigrate to Earth with their other Centaurian brethren. Many to the North American continent, primarily Canada, though several families pursue a nomadic lifestyle and wander anywhere that they feel the greatest connection to the Spirits and elements. Often, this means that the Grizzly Men form deep bonds with indigenous peoples, such as the Inuit, various Native American tribes, and other spiritual families throughout the world.
END_OF_DOCUMENT_TOKEN_TO_BE_REPLACED